Two weeks since the qualifiers for each region began, they end. We now know all 24 teamswho are going to Antwerp and have a chance at glory, a fat paycheck, and the title of Major Winner!

Starting with the teams that'll enter at the Contenders level, we have Liquid, 9z, IHC, Renegades, Outsiders, Spirit, Complexity & Eternal Fire. Next up, the Challengers; composed of ENCE, G2, MIBR, Vitalityh, Imperial, Bad News Eaglers, Astralis & forZe. Then lastly, the Legends, the teams who qualified with the most flying colours, those are BIG, Heroic, Copenhagen Flames, Cloud9*, FaZe, NAVI, FURIA & NiP.

Here's a graphical representation of who qualified for which starting position in the Major! 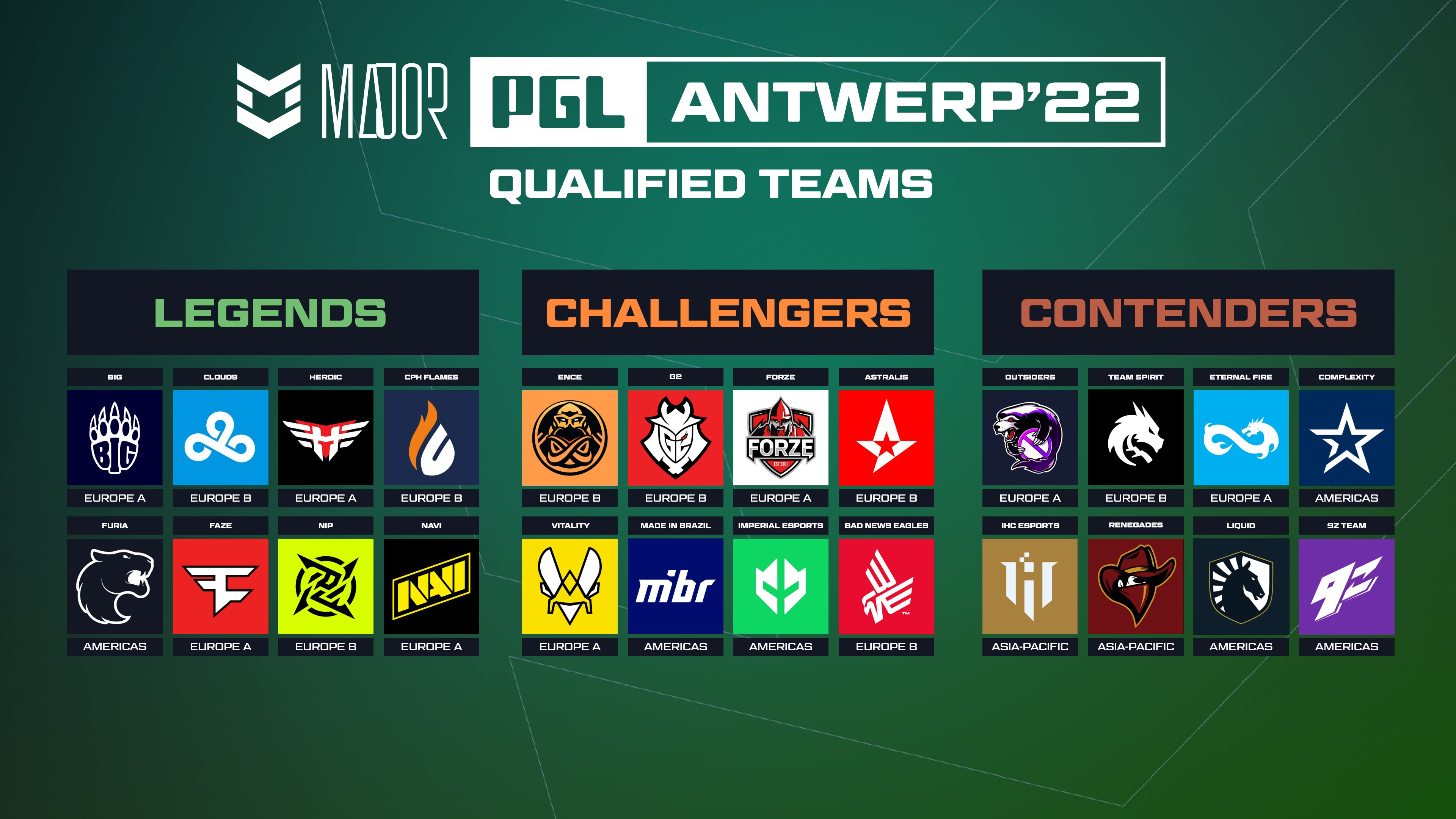 For these teams, the battle is far from won. Whilst their names are solidified as teams that have qualified for the Major, each of the teams will be eager for more. The qualifiers were hard-fought, with very few teams having an easy experience from start to finish. Vitality's 'apEX' went as far to state that "This was the hardest major qualifier I ever played", and this is from a player who has qualified for 6 Major's previously, including both of the Major's in 2017, and the two most recent events, the Berlin 2019 Major, and the Stockholm 2021 Major. Along with Vitality, another former powerhouse that struggled was Astralis, who also went 3-2 in the group stages. For Copenhagen Flames, Players (now Cloud9), Heroic, BIG, MIBR & FURIA, they were the ones who got through qualifiers 3-0, with no losses in the group stages.

The Major Challengers stage will start in 2 weeks' time, on May 9th. In the meantime, we have BLAST Premier Spring Showdown which starts on April 27th, and runs until May 1st, giving some of the teams now qualified for the Major, including Astralis & Copenhagen Flames, plus Heroic & NIP some vital matches, possibly against each other, to learn some tactics from should they come into each other at the Major.

* Cloud9 has bought the team previously operated by Gambit, which competed in the qualifiers as 'Players'.

Yesterday FaZe win PGL Major in Antwerp!  FaZe were able to bring all they had, and down Natus Vincere 2-0!Thursday, May 12th 2022 PGL Major Legends Stage Teams Finalized  After 4 days of carnage, 16 teams are down to 8, and go face first into the previous 8 Legends.Wednesday, May 4th 2022 PGL Antwerp Major set to get underway, first matches announced!  Not only do we have the first match ups of the Contenders Stage, but in-game we have the Pick 'Ems!Wednesday, April 20th 2022 Europe A RMR completes, 8 teams go through to the Major  The teams include favourites like Heroic & NAVI, but also feature less likely candidates like forZe & Eternal Fire.Friday, April 15th 2022 Americas RMR completes, 9z, FURIA & Liquid amongst qualified teams  For FURIA, Complexity, Liquid, 9z, Imperial & MIBR, the journey continues to the main event.Sunday, April 10th 2022 FaZe win ESL Pro League Season 15!  After a gruelling month of action, FaZe finally emerged as the victors!Monday, April 4th 2022 MIBR win ESL Challenger League S40 - North America  The Brazilian team had a dream run, losing a total of 0 of their 10 matches.Monday, April 4th 2022 Pro League group stage comes to an end, Group D results!  To no ones surprise, Natus Vincere were the 5-0 team of Group DFriday, April 1st 2022 K23 emerge as the champions of Thunderpick Bitcoin Series  After two long months, a winner was finally crowned.